In 1876 Simon Fraser, 13th Lord Lovat passed the site and land to the Benedictine Fathers of the English Congregation of the Order, who wished to establish a monastery in Scotland. The monastic buildings were begun a few months later and were completed in the early 1880s.

The two main bastions and other parts of the fortress were entirely demolished to make way for the ambitious new abbey. Major parts of the monastery were designed by Peter Paul Pugin, the son of Augustus Welby Pugin, architect of the Palace of Westminster.

The church designed by Pugin the Younger was commenced in 1890, replacing a temporary wooden one that previously occupied the site. 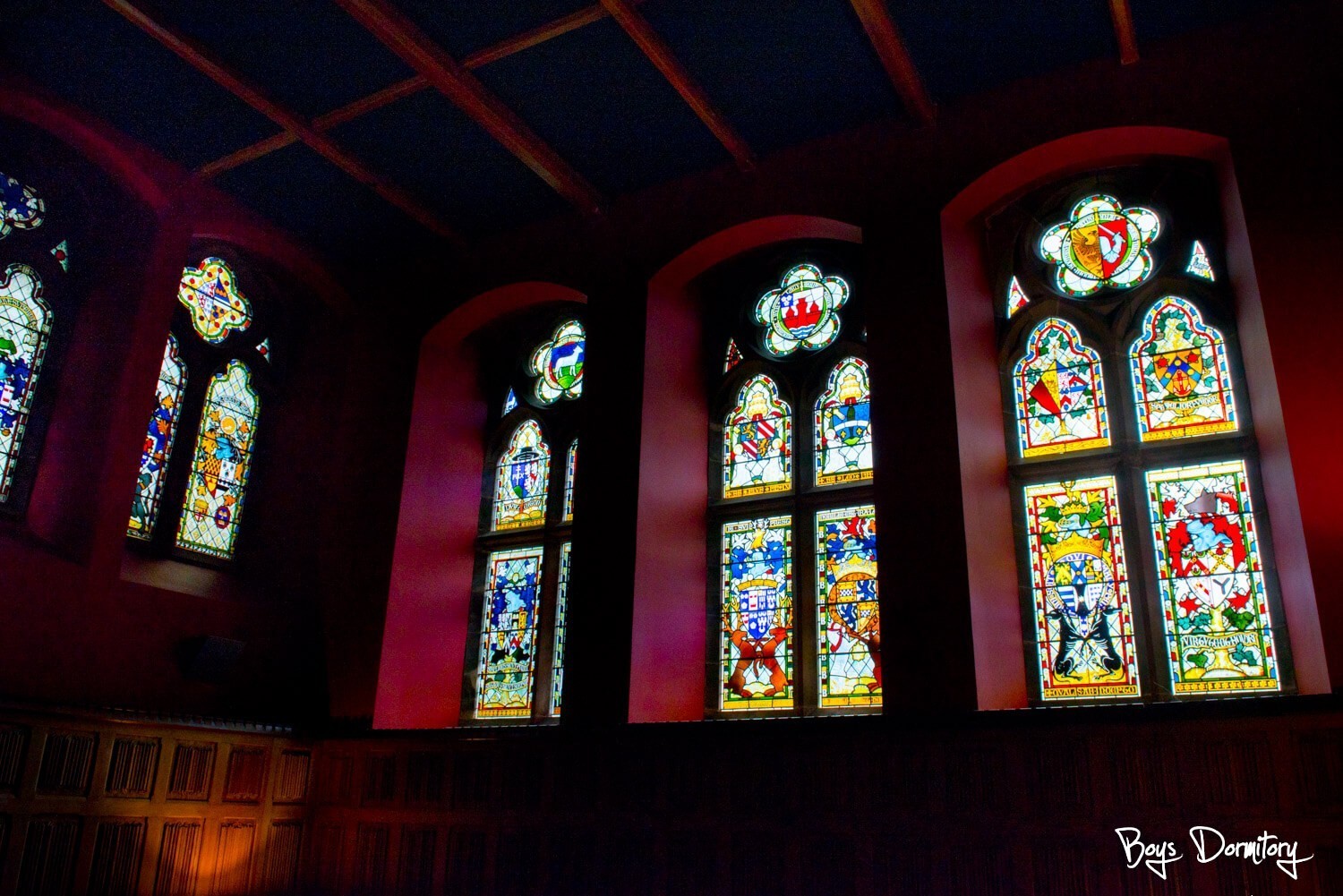 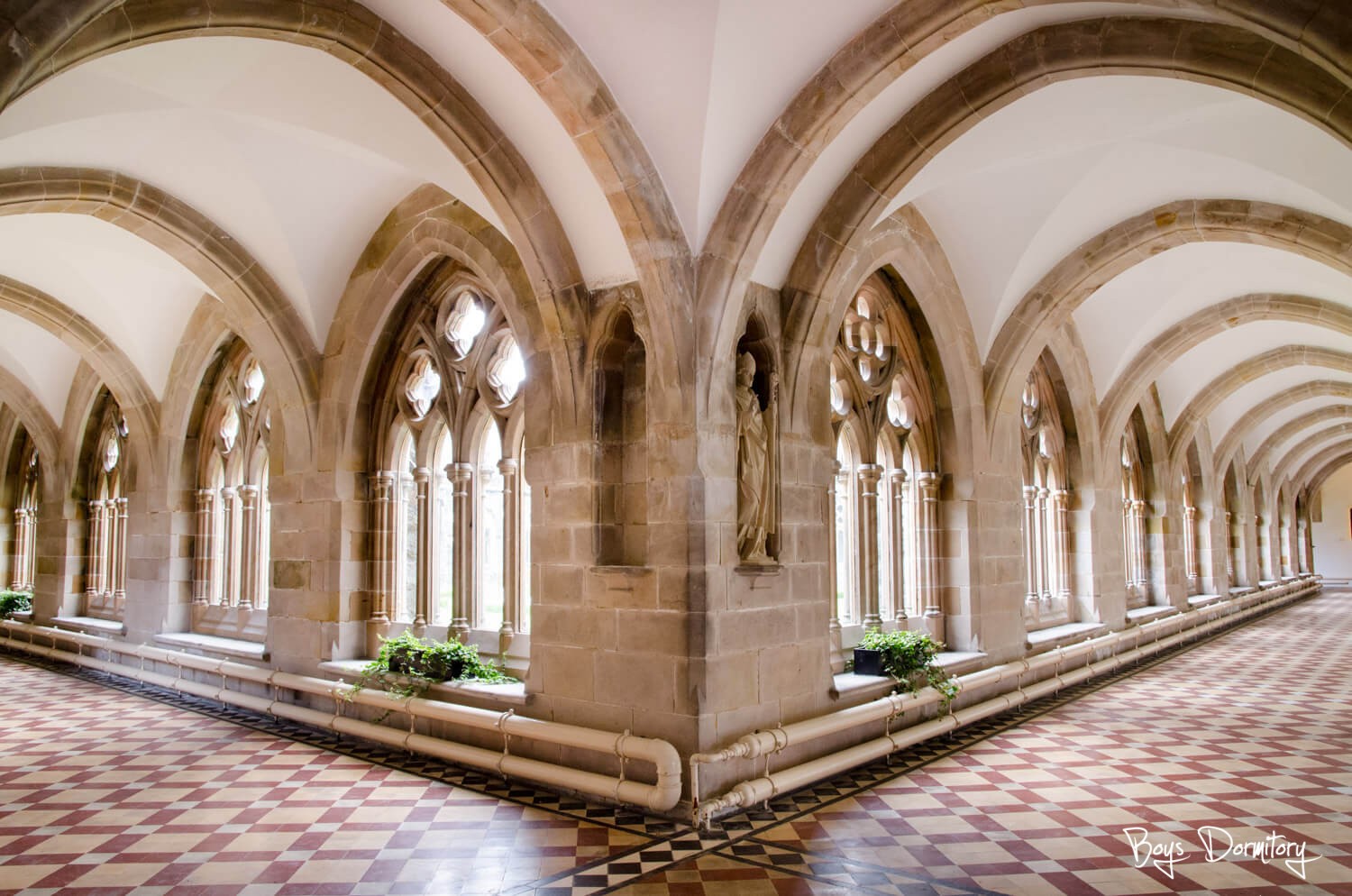 In 1878, in one wing, a school for 50-60 boys from the upper classes of society was conducted by the monks for about sixteen years. This was then extended to create Fort Augustus Abbey School which at its height accommodated 150 boys.

St. Benedicts Abbey was the only monastery for Benedictine monks in Scotland; and the school became very popular as its excellent academic reputation grew over the years.

The school operated until 1993, when the dwindling demand from pupils in the region and the decreasing population of monks led to its closure.

Over 300 million years ago, a collision of tectonic plates forced the land to bend and buckle, forming high mountains and deep gorges. In Scotland, the collision is marked by the Great Glen which cuts across from Fort William on the southwest cost to Inverness on the northeast coast. The depths of these gorges were gradually filled with water and a string of lochs were formed: Loch Oich, Loch Lochy and Loch Ness.

Loch Ness is one of the largest lakes in the British Isles: it is about 24 miles long, up to half a mile wide and 980 feet deep containing roughly 265,000 million cubic feet of water.

Loch Ness contains more water than all of the lakes of England and Wales combined, making it the most voluminous lake in the UK.  But it is not Scotland’s biggest loch (that’s Loch Lomond) or deepest (that’s Loch Morar.)

The loch is fed by eight rivers, sixty sizeable streams and countless small streams. These rivers and streams wash peat particles down from the mountains, making visibility practically nil.  Nonetheless, the loch is free of pollution and teeming with life: sea trout, brown trout, salmon, arctic char, eels and pike can all be found in its murky depths. There have even been reported sightings of sturgeon and dolphins.

However the loch is famed for a larger creature which is said to live here, known as the Loch Ness Monster or “Nessie.” 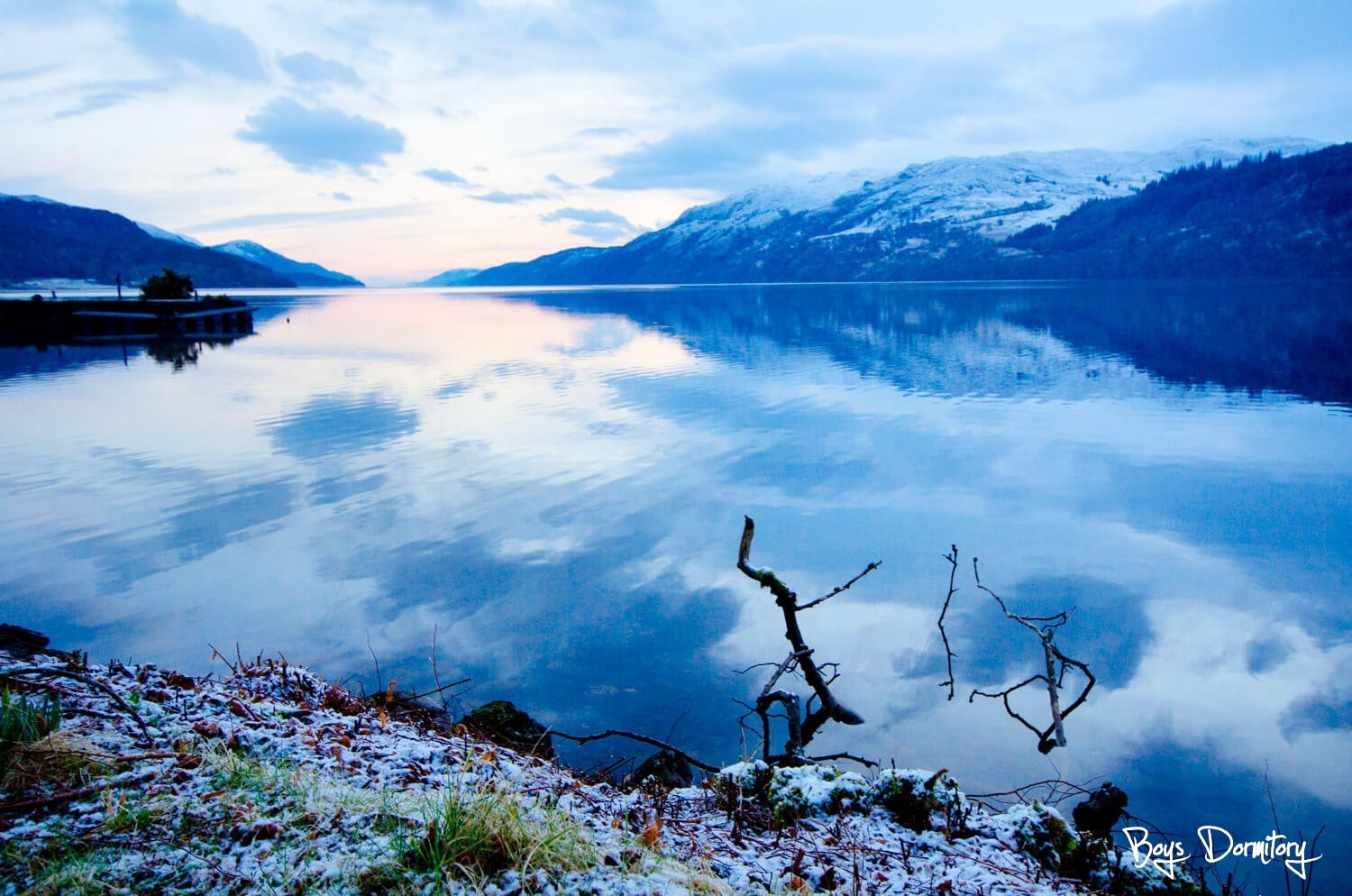 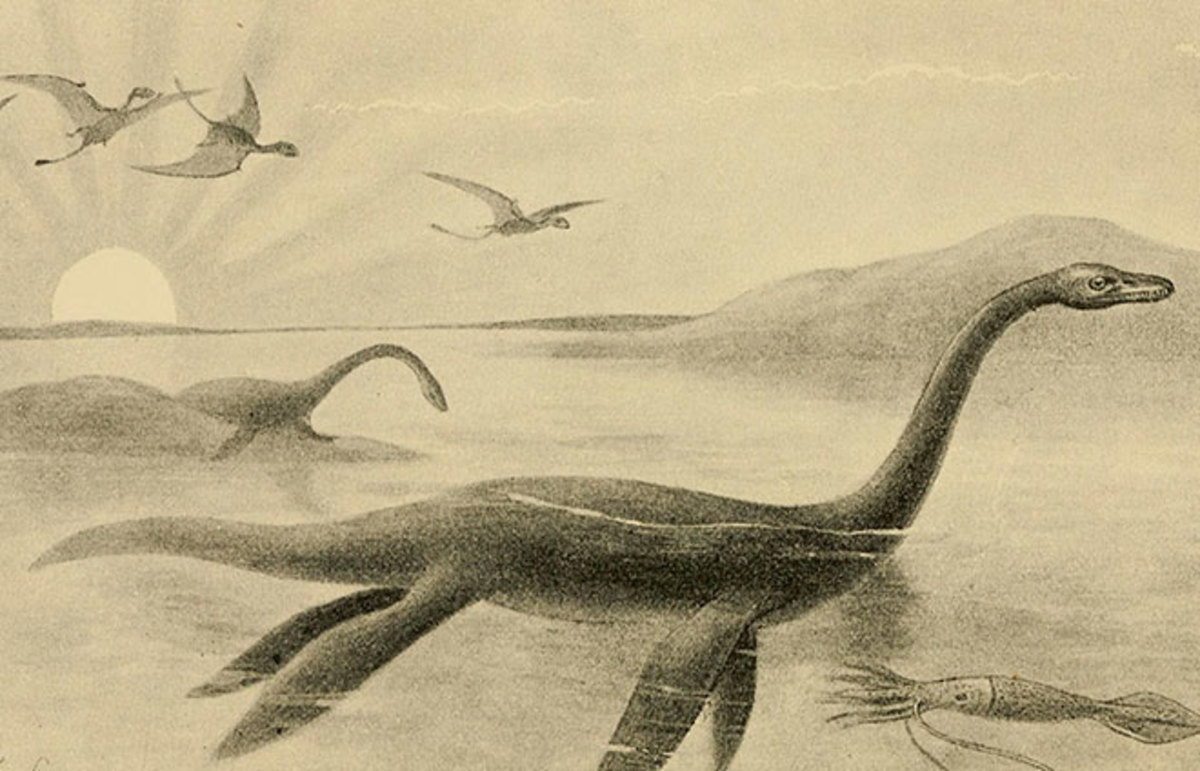 The first recorded sighting of the monster was in 565 A.D. St Columba, while on a mission to convert the northern Picts, stopped off by the loch side to preach. While he was preaching, there was a disturbance in the waters and the monster appeared.

By some accounts one man was slain only to be returned to life by the divine powers of the saint. By other accounts the monster attached a member of the congregation, at which point the saint made the sign of the cross and invoked the power of God to drive the beast away.

In 1933, an article in “The Scotsman” newspaper cited a story from 1520 A.D. which mentioned the beast. It was the appearance of the article which seems to have simulated interest in the loch and its wildlife. At the same time the construction of a new road on the northern shore opened up new view of the loch.

In any case, in the years that followed there was a spate of sightings. It was from this time that our modern image of the monster began to emerge: a water dwelling dinosaur, probably some kind of plesiosaur.

The story was published internationall, newspapers reported the monster as fact adn journalists and photographers arrived from all over the world. Even the British prime minister of the time planned a monster spotting trip to the loch.

Nessie is now considered by many to be the world’s most famous monster!

The great Scotsman Thomas Telford was commissioned to build the supposedly impossible canal through the rugged terraine of Scotland’s Great Glen. He is arguably the most influential civil engineer who ever lived.

The canal was conceived to provide safe passage for shipping, avoiding the dangerous route through the Pentland Firth and around Cape Wrath over the hazardous northern tip of the British Isles. The construction of the canal also provided employment after the Highland Clearances for 3,000 men. Engineerings working the canal faced significant challenges: the Highland ground was hard and the Scottish climate harsh, whilst the locks were the largest ever constructed in the world at that time.

After a decade of laborious work, the canal was completed in 1822. The doubters, grumblers, prophets and sneerers were all put to silence at the grand opening.

Unfortunately, the success was short lived, as in the fast moving industrial age steam ships became common and the canal wasn’t big enough to carry them. It soon became a catastrophic commercial failure. It is, however, a superb civil engineering feat that will survive for many centuries. It is now a Scheduled Ancient Monument, and attracts over a million visitors each year. 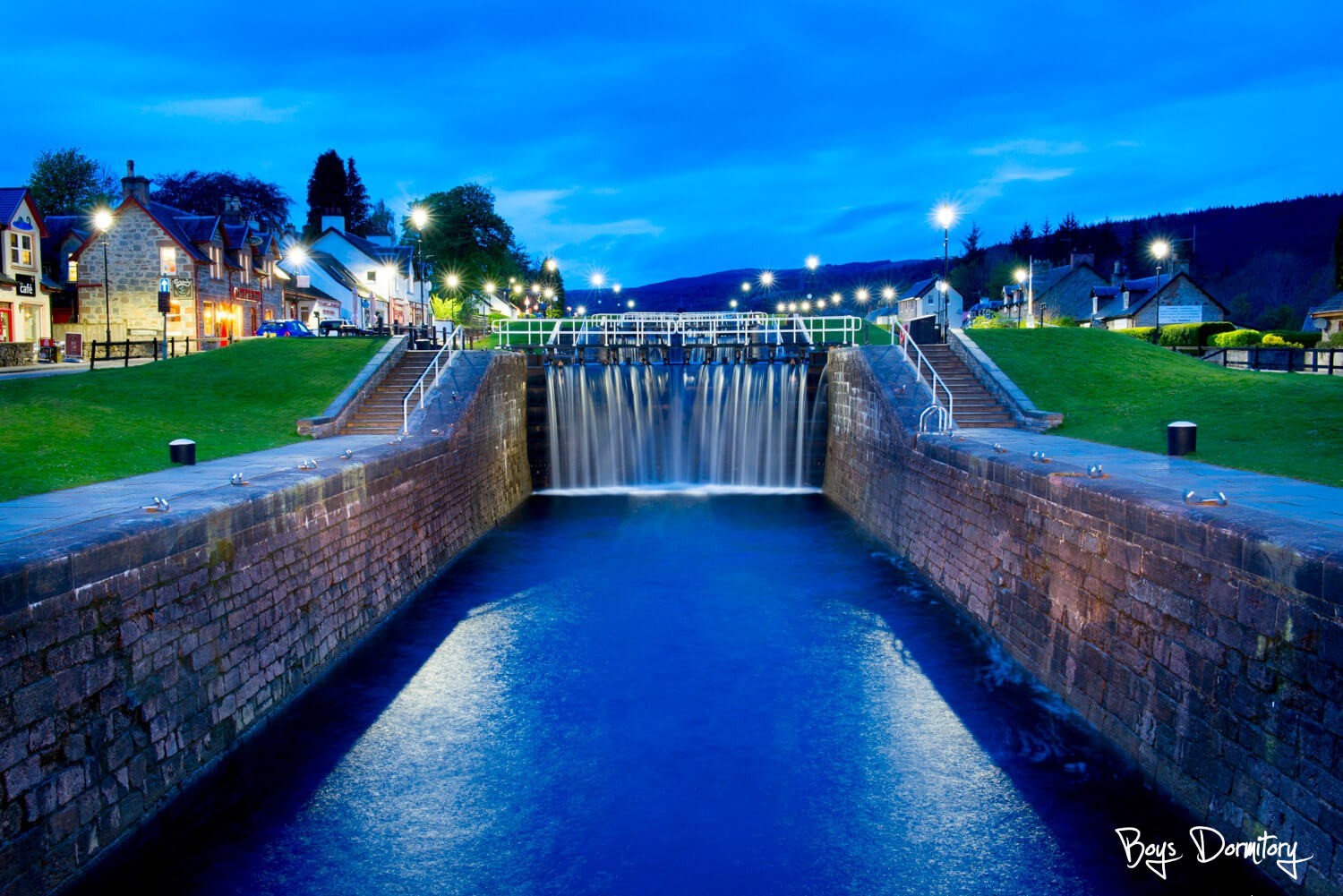 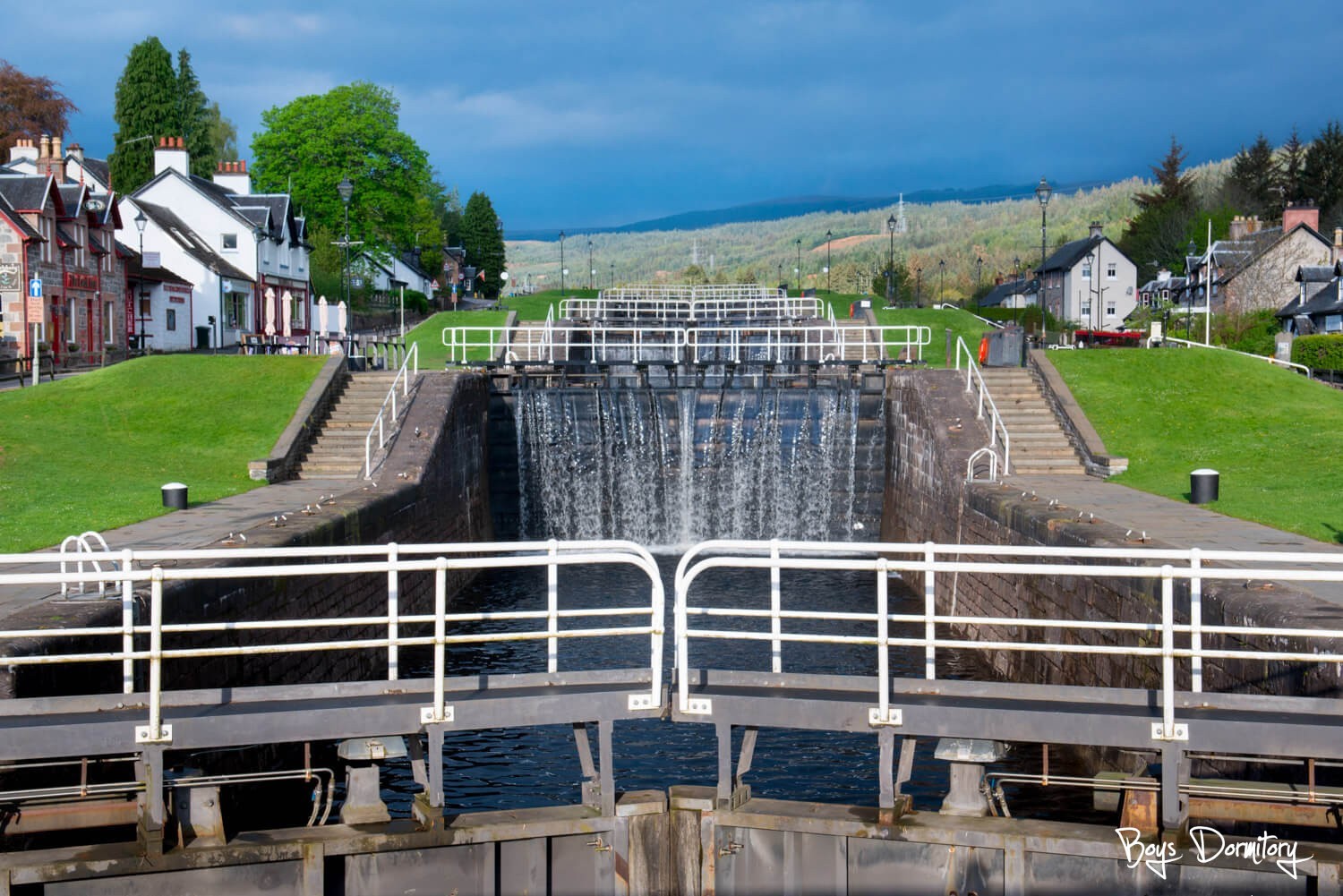 Queen Victoria and Prince Albert visited Scotland for the first time in 1842 and embarked on a lifelong love affair with the country, its wild and beautiful landscape, its people and its ancient traditional culture.

Their purchase of the Balmoral Estate and their love of the Highlands encouraged many travellers to follow in their footsteps.

Queen Victoria took a trip along the canal in 1873. She commented on the “very rude” people peering in whilst she dined on board as her boat navigated the locks through the centre of the village.

Soon afterwards paddle steamers operated busy passenger services along the Great Glen to meet the public’s insatiable demand to visit the wonderful landscape that was so enjoyed by their monarch.

Shipping increased during WWI as vessels tried to avoid the German Navy patrolling of the Northern coasts of Scotland.

The canal is now used mostly by recreation users and pleasure boats. It’s also used by the many traditional fishing boats that make their way through the Great Glen as they transport their harvest from the rich fishing waters of both the Irish Sea and the North Sea.

Fort Augustus emerged as a major military base due to its position at the south-west end of Loch Ness near the intersection of key military roads. Barracks were built immediately after the 1715 Jacobite Rising across Scotland, but these were to be followed by major fortresses in strategic locations. Located at the heart of the troublesome Highland region, Southern Loch Ness was key to the effective control of the area, and in 1729 General Wade commenced construction of a substantial fortification capable of holding up to 1,000 men in an emergency. At this time the settlement was renamed Fort Augustus after Prince William Augustus, Duke of Cumberland.

Despite being a state of the art facility, it was captured by rebels in 1745. The rebellion was a major attempt to overthrow King George I and place James Stewart ‘The Old Pretender’ on the throne. The rebellion was quickly suppressed, most famously so when the English Army defeated the Highlanders and James Stewart at the bloody Battle of Culloden in the northern highlands. 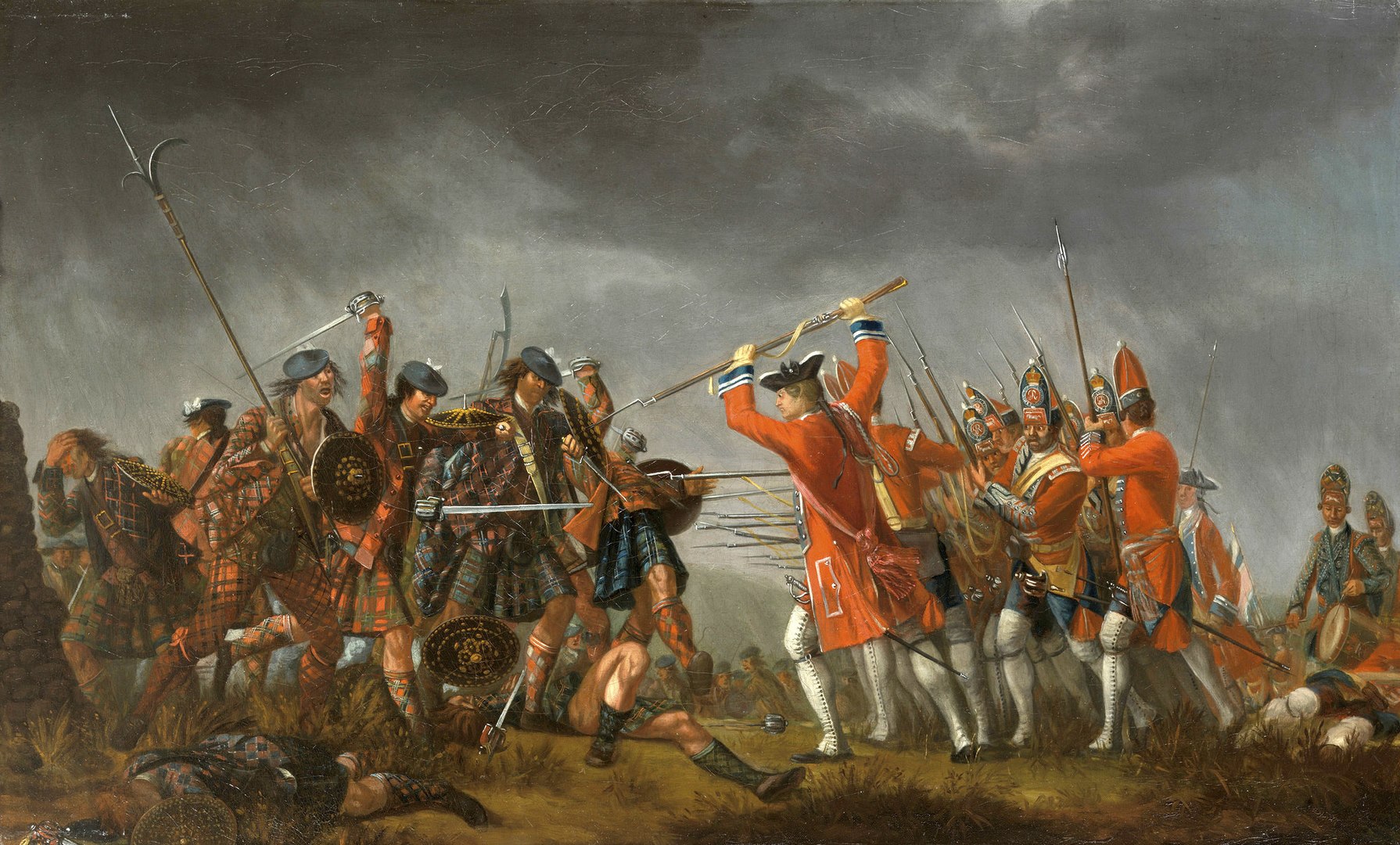 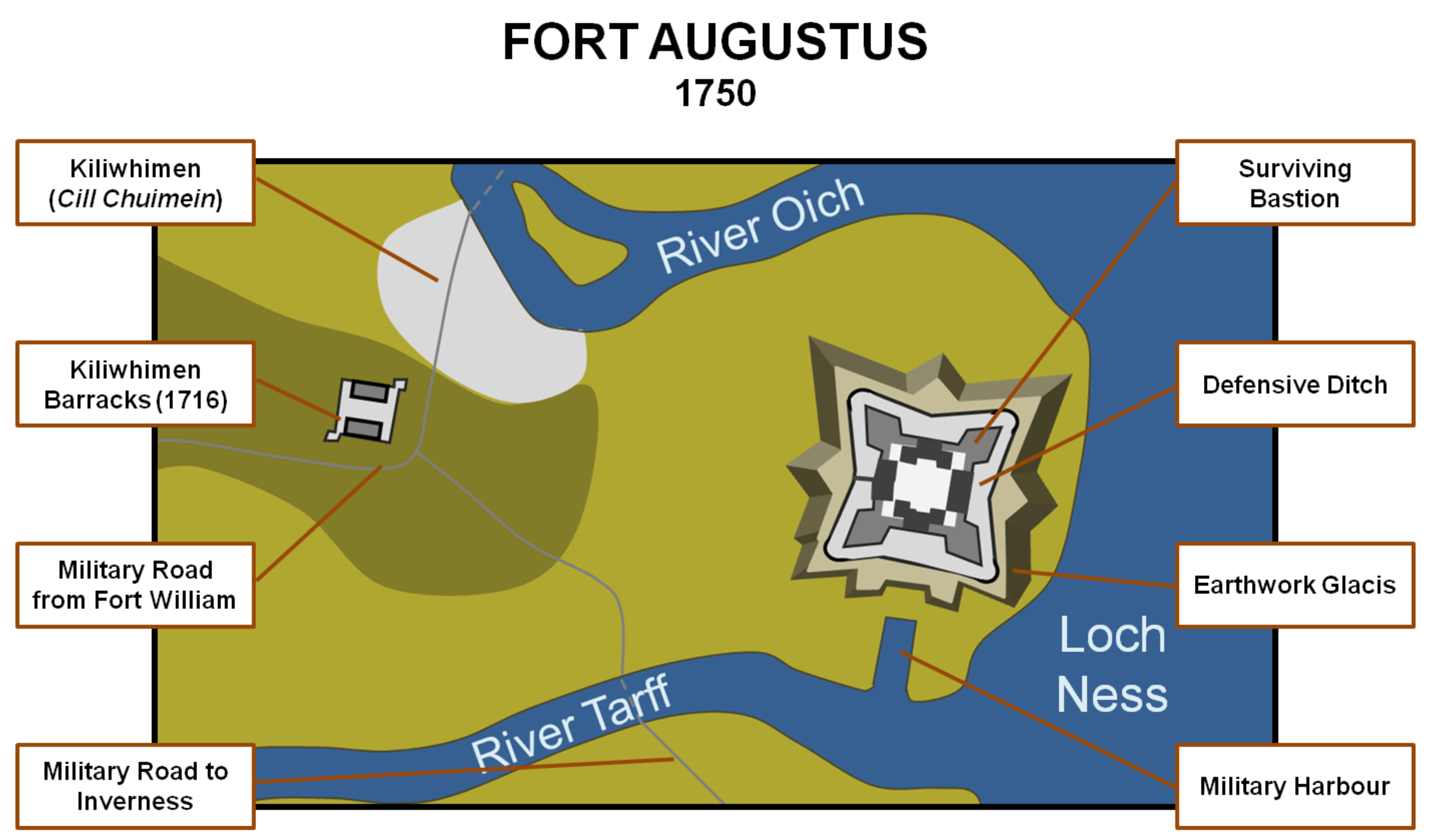 The Hanoverian government in London wanted to ensure that the unruly Highlands were kept firmly under control, and Fort Augustus was key to their authoritarian rule. The fort, restored to more than its original strength after Culloden, continued to be occupied by a garrison for more than a century.

The surrounding lands formed part of the estate of the Frasers of Lovat, until the connection of the Chief of the Clan, Simon, Lord Lovat, with the Stewart rising, resulted in the forfeiture not only of his property but of his life. He was carried as prisoner to Fort Augustus and confined in one of its dungeons before being taken to London, where, after impeachment as a rebel, he was executed on Tower Hill.

The beautiful village of Fort Augustus is one of the most popular visitor destinations in the Highlands.

Fort Augustus, although small, has a lot going on! This is perhaps due to its geography, situated on the shore at the extreme southwestern end of Loch Ness. With a population of six hundred people, the village is compact, picturesque and usually bustling with activity – especially so with tourists during the high summer period, though it’s never congested.

Boats travel north and south along the Caledonian Canal which cuts through the centre of the village, as does the road from Fort William to Inverness via a swing bridge.

A lovely pastime is to sit outside a Fort Augustus pub or restaurant with a drink or meal spending a lazy hour or two watching the boats of all shapes and sizes passing through the series of locks on the canal.

The old village shops, pubs, restaurants and houses straddle the Caledonian Canal’s ladder of five locks. The historic village and landscape is one of the most stunning sights along Thomas Telford’s 19th-century engineering masterpiece, the Caledonian Canal. 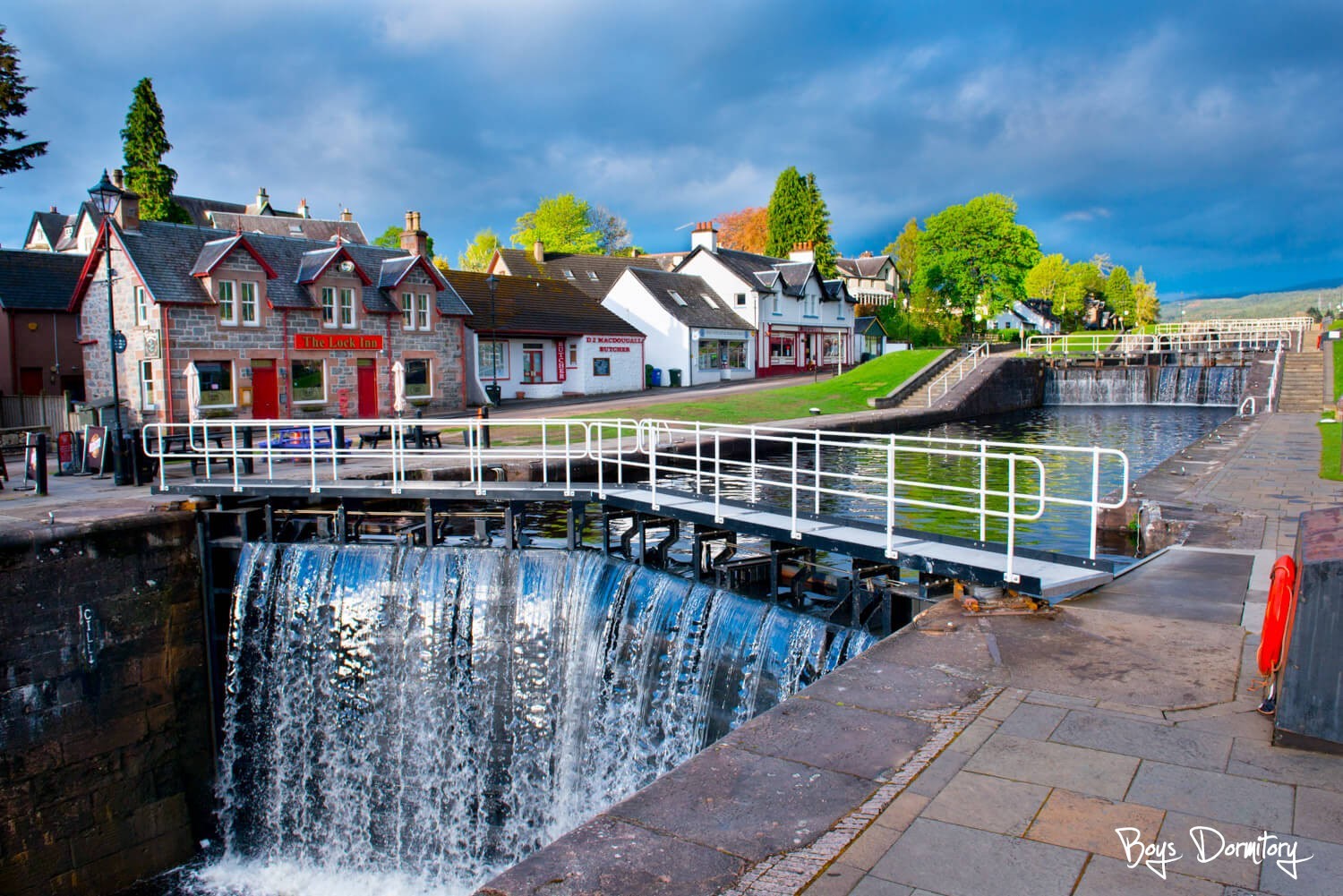 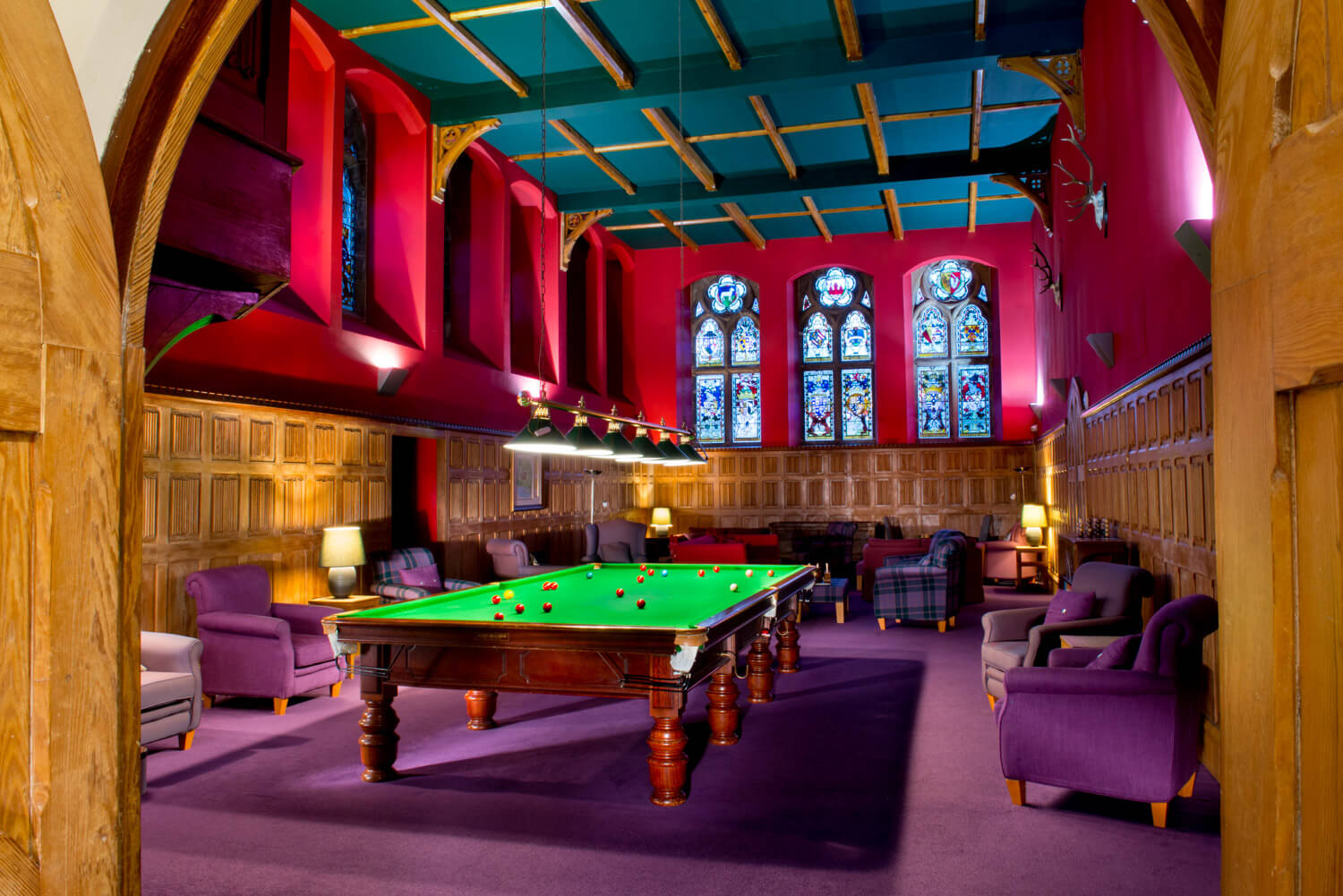 A number of private individuals and organisations attempted to make use of the buildings but the site was eventually abandoned. In 2003 The Santon Group, a respected developer of listed buildings, purchased the dilapidated Grade A listed buildings and grounds. A £30million conversion of the site was embarked upon finally being completed in 2012.

Today the austerity of monastic life has given way to the warmth of modern leisure living, whilst preserving its fabulous heritage and extensive architectural features.

Whilst visiting the abbey, you can enjoy the atmospheric swimming pool, sauna & steam room inside the old chapel. We also have a 12 foot billiards table inside the luxurious club lounge.

How one recent guest described their stay at The Boys Dormitory:

‘Hogwarts – Harry Potter’ – We have just arrived home from our second stay at The Boys Dormitory and have had such a wonderful time, next year is booked already!  If you want somewhere truly magical, stay here!!!!

The apartment is first class with its amenities and position over looking Loch Ness. We have photos that have changed everyday due to the sky and atmospherics, it blows your mind!

Cannot recommend this enough. We are world wide travellers, so know FANTASTIC when we see it! A MUST stay in your lifetime!!!